After our flight from LAX – Los Angeles to DXB – Dubai, we spent a few nights in Dubai at the Al Maha Resort before flying to MLE – Male airport in the Maldives on the same reward ticket. Initially we were scheduled on the 777 with the old First Class configuration but a couple of weeks prior to our departure, we noticed they switched the aircraft and that if all stayed the same, we’d get to fly in the new Emirates First Class suites. We held our breath, crossed our fingers, and hoped for the best and as unlikely as it was, we got to fly in the new private suites! In this post, we share information about our experience flying between Dubai and the Maldives in Emirates First Class on the new 777.

To our disappointment, our flight was departing out of B gates which meant we’d once again have to skip going to the fancy Emirates lounge. That being said, we didn’t have that much time to spare at the airport anyways and went to one of the regular lounges.

Based on our gate assignment, we’d have to be bussed to the aircraft which is something we always find slightly inconvenient. Thankfully, Emirates has a bus for First Class and Business Class passengers with comfy seats, so it was quite pleasant and we got to see lots of airplanes as we drove around.

We boarded the airplane and found out we were the only first class passengers which meant we’d have the cabin to ourselves. We kept our seats from the last flight; I was in 1K and Jason in 2K. Due to it being a busy time at the airport, our departure was delayed due to flow control and we spent a good 45 minutes inching our way for takeoff on the runway. We made the most of this time to take photos of the suites and get use to their features as they are very high tech.

Compared to the older product on the A380 and the 777, the new suites are fully enclosed from floor to ceiling for maximum privacy and offer 40 square feet of space. From your suite, there are lots of features you can customize for your comfort, including ambiance lighting, the temperature between 18 Celsius to 26 Celsius, and you can move your zero gravity seat horizontally. If there is one thing that really stands out, it’s the new design which is more neutral and less gaudy than the old design.

View of suite 1K from the outside 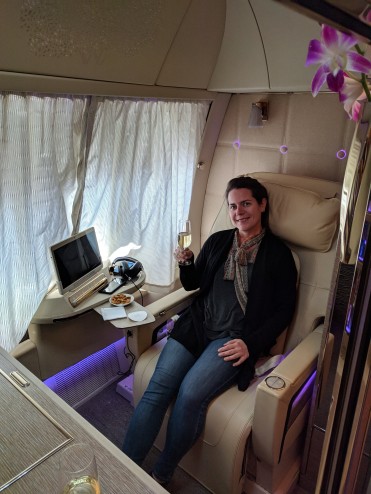 The in-flight entertainment screen is also 32 inches and has high resolution, so much so that you get a better view of things from the cameras than looking out your window in some cases. Another nice feature is the small storage locker beside the seat for items like small bags and jackets. Some people have complained about the lack of privacy due to the slats in the blind but I didn’t mind and found I still had more than enough privacy. You can also use a video phone on your handset to call the flight attendant to request things which is super convenient as the phone on the old product never seemed to work.

A fully enclosed suite on the Emirates 777 in First Class…best way to fly!

One great thing about this new product are the middle suites which have virtual windows with high definition views of the cameras mounted outside the aircraft and offer better views than from your window. Since no one else was in first class, we got to test this out.

After we took off, we had a look at the menu and submitted our meal and drink orders. We were both excited to see they had the Arabic mezzes which is one of our favorite all time airplane meals as it was unavailable on the LAX – DXB flight. Unfortunately, catering messed up and only one of those was loaded so we decided to share it and the main which was a fish curry.

Due to our flight path, we got to see lots of scenery, including an aerial view of Al Maha where we had just stayed, mountains in Jordan, and eventually the blue seas and little islands that form atolls in the Maldives. 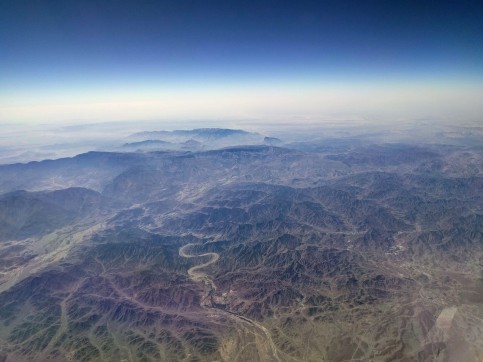 Final approach into the Maldives

At one point the Flight Attendant brought out the Polaroid camera and we tried to take photos but they didn’t turn out. The pilot also came to say hi and we had a nice chat. He asked how I was enjoying the flight and if my oil and gas employer paid for it. I was very proud to tell him that Jason and I saved up the points in one year by spending our weekends flying on Alaska Airlines to afford this indulgence to celebrate our 15 year anniversary. He asked me if it was worth it, and I told him that yes indeed it was worth it. It was really nice to chat with the captain and we hope he is enjoying his retirement in the cooler climates of Europe with his wife.

After a quick nap, it was time to wake up and get ready to arrive in the Maldives. Again, the flight was too short and we wish we would have had more time to enjoy the suite and the service. We absolutely loved the new suites on the 777 and as great as it is to shower for 5 minutes and use the bar on the A380, we prefer the new first class cabin on the 777 because it’s more important for us to be comfortable in a seat for a long period of time. Based on the products we flew on this trip, the new suites on the 777 feel like a first class product, especially when you compare them to Qatar’s business class Q Suites on the A350.

What’s more important to you, the quality of the seat or other things like access to a shower and a bar? Do you find the new suites on the 777 private enough?