From low-key taco stands to modern and hipster’sih food truck gardens, and high end dining, you will need more than 24 hours to sample all of it in Tijuana. We barely got to visit all the places on our list and ended up trying places that weren’t. If there is one thing we did experience is how easy it is to find delicious food at reasonable prices all over Tijuana. In this post, we share information about places to visit to create your own foodie-itinerary in Tijuana.

Known as “Taco Alley”, Avenida Guillermo Prieto near Avenida Gobernador Balarezo is a street with about 6 taco stands located in close proximity to one another and a great place for a mid-day or late night taco crawl. Many of the places are pretty much open 24 hours per day, cash only, and since very little Spanish is spoken, make sure to have a general idea of what things are or else you’ll need to point and order. While everyone has their favorite and you can’t go wrong, Las Ahumaderas is very popular since Anthony Bourdain visited on the episode of “No Reservations” where he visits the Baja Peninsula.

We visited two food gardens in Tijuana: Plaza Rio Food Garden and Telefonica Gastro Park. These food gardens and their setting remind us of the food truck parks we’ve visited in Portland Oregon; they’re very casual, fun, and have a lot of good food to choose from. 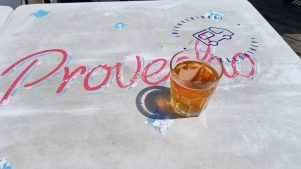 Gummy bear ale at Gastropark Telefonica on the patio

From Food Truck to Brick and Mortar Restaurant – Tras/Horizonte:

One of the first and best food trucks in Tijuana was tacos Kokopelli. Known for its creative and contemporary street tacos, it developed a loyal following and grew fast. Despite their success, they have had a few setbacks but since it’s pretty much considered an institution in Tijuana, we decided to try Tras/Horizonte for lunch. We really like the eclectic but comfortable space and enjoyed sitting outside on their patio. After we ordered our drinks, they brought us a selection of salsas and condiments with tostadas to taste which got us excited about the meal. We ordered a tiradito de atun (tuna ceviche) and two tacos (Kraken and Chicano, both octopus) to share. Maybe we were there on a bad day but we were a little disappointed overall; despite the nice presentation, there wasn’t a lot of flavor, including my margarita. Since we had so little time and there were so many other places we wanted try, we thought this was a miss and we should have saved our appetite for something else.

Tijuana style tacos at Tras/Horizonte: both octopus (aka “pulpo”)

Bierhalle is a craft beer bar with food too. They feature local Baja beers in addition to popular ones from California. The food menu has a mix of Mexican inspired dishes and typical pub grub like wings and pizzas. We were intrigued by the “Trompo de adobada” that other patrons were having so we ordered one, not realizing how filling it was going to be. You can order it in two formats and this is the smaller of the two sizes, which was way too much food considering we were planning on going on a taco crawl after. The concept is like a “create your own al pastor taco”. We really enjoyed this other than the tortillas which were a little stale.

We were not expecting to eat at Sushi En La Azotea but the Peruvian ceviche we saw on the menu was calling to us and so we decided to have a margarita as our nightcap and the ceviche as a snack. Overall, we enjoyed it and found the prices to be very reasonable for the quality, quantity, service and setting. We are very spoiled with good sushi in Vancouver but we’d consider eating here again based on the quality of the ceviche.

In Mexico, “tortas” are known as sandwiches and Tortas Wash Mobile has been making theirs since 1964.  This place is called Tortas Wash Mobile because it opened without a name and was located beside a car wash. Essentially, the torta here is grilled beef (marinated strips of brisket cooked over mesquite chips and charcoal), mayo, guacamole, pickled red onions and hot sauce. By the time we arrived at 12:15, it was closed because they were sold out which was so disappointing! Considering how some say it is worth crossing the border just to eat a torta here, we were not surprised.

What are your favorite places to eat at in Tijuana? Does the idea of a taco crawl sound fun to you?