Tokyo is one of the world’s greatest cities and planning a visit there can be challenging; not only is the city massive but the language can even be challenging when researching online. It’s also one of those cities you can ask for recommendations but no one seems to recommend the same things.  There are so many options and unless you have weeks (and perhaps even months) to spend here, you’d probably barely even start to scratch the surface of what this city has to offer. We spent months researching and came up with this list of things we learned during our travels to Tokyo to help you research and plan your trip.

We ended up staying in Shinjuku and really enjoyed it; we felt there was a lot nearby as far as food, beverage, and sites in addition to being convenient to access other places. When we started researching where we wanted to go and what we wanted to do in Tokyo, we places markers on a Google Map to help assess whether or not we were staying in the most optimal neighborhood, and we did. It was actually pretty quick and easy to walk or take the train to Shibuya and Harujuku and the train to Chiyoda City.

Hotels in Tokyo are super expensive year round and so if you have hotel points, they will definitely come in handy. We redeemed 12,500 points per night to stay at the Hyatt Regency Tokyo during the World Rugby Cup when hotel rates were $700USD + and feel we got good return on investment. We also used a lounge certificate to get free breakfast and happy hour in the evening.  Since we were out and about lots, splurging to stay somewhere fancy would have been wasted. We did enjoy our stay but would be hard-pressed to pay about $300-$400USD per night which is the going rate.

Japanese breakfast foods at the lounge at the Hyatt Regency Tokyo

Our room at the Hyatt Regency Tokyo

Tokyo is a lot more cash-based than other places we have visited even if they seem light years ahead with technology; we knew this and prepared for it!  We had purchased Yen in Canada before leaving and just planned to use an ATM to withdraw cash as needed while in Tokyo. We did find it difficult to figure out how much cash we’d need and didn’t want to end up with too much after the fact either and tried to use credit card when possible. Overall, it was easy to withdraw cash at the 7-Eleven but one thing we didn’t know is that there is a 10,000 Yen minimum; roughly $120CAD. Since it was our last night and even if it is easy to spend money fast in Tokyo, we were a little annoyed at having to take out that much money. We also experienced issues in the sense it wouldn’t let Jason take out the money with his card as he had already taken out money within 24 hours even if he had not exceeded thew daily amount. We also usually bring and use the CIBC AC Conversion Card because you can store 10 different currencies at a time on this prepaid VISA and easily withdraw from ATMs but the card did not work as intended or how it was supposed to in Japan. We do recommend bringing 2 ATM cards. We were able to use credit card at a few craft breweries, Savoy Pizza, and to buy the train tickets to NRT – Narita Airport.

We are incredibly spoiled in Vancouver with delicious, fresh and cheap sushi and so we decided to skip the Michelin Star restaurants to save money on this trip. We had thought about booking a lunch at one of the cheaper set menu sushi places but some of them were really out of the way and we would have had to use one of those services that charges you $ to make a reservation for you. In the end, we got to eat delicious sushi and Japanese food on Japan Airlines and decided to focus our attentions on other food Tokyo has to offer, like okonomiyaki, ramen, yakitori, and even pizza. Depending where you are, we really recommend the following if you want a meal under $50 for two people:

Hiroshima-style Okonomiyaki at Buchiumaya: This spot was about a 10 minute walk from the Hyatt Regency and serves up made-to-order okonomiyaki and other snacks along with drinks. We really enjoyed sitting up at the counter while watching them prepare the food. Thankfully, they have an English menu here but even if they didn’t just sit down, point, and order. We can’t say that we are fans of the bonito flakes they sprinkle on top of the okonomiyaki before serving it but it is part of the experience and you can push them aside. 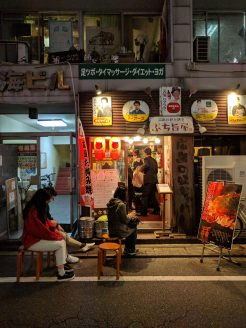 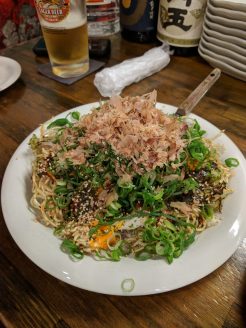 Our seats at the counter at Buchiumaya

Kikanbo: We really enjoyed the Devil’s Ramen at Kikanbo with some cold beers. It was probaly some of the best ramen we’ve ever had since we like things spicy and found this one really flavourful. Our Instagram post has some tips about eating at Kikanbo! 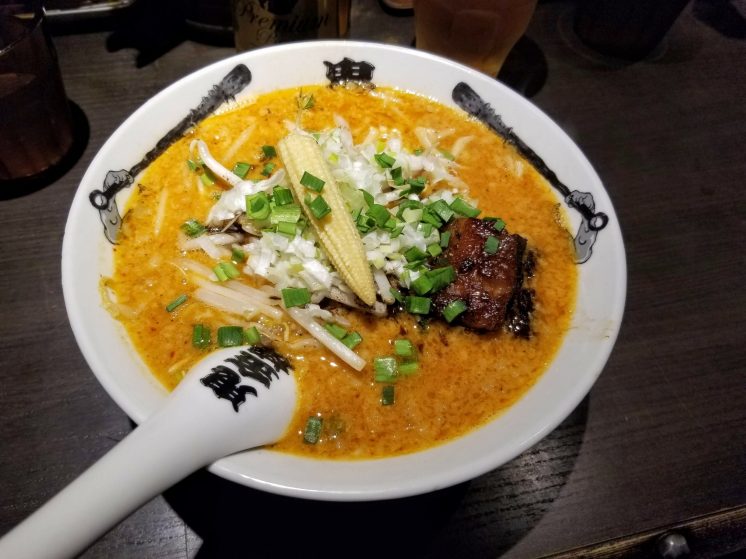 Sasamoto in Yakitori Alley in Shinjuku: Off to the side of the malls and skyscrapers is a set of alleys with yakitori stalls known as Tokyo’s Memory Lane or Piss Alley. It does look touristy but it is not as touristy as you would think. As you make your way the narrow alleys, walking very closely to hot and sizzling grills, it can be hard to choose somewhere to eat. We ended up choosing Sasamoto, a hole-in-the-wall that dates back to 1945. We sat down when to seats became available and didn’t know what to do as there was no menu. The chef offered us mix barbecue which we accepted and started to serve us skewers. We had about 8 skewers each and 2 large beers for $45 with tax. There were no prices advertised so we were a little worried but found it very reasonable for the quality and quantity, no regrets! It was also a mix of tourists and locals here which made it fun. 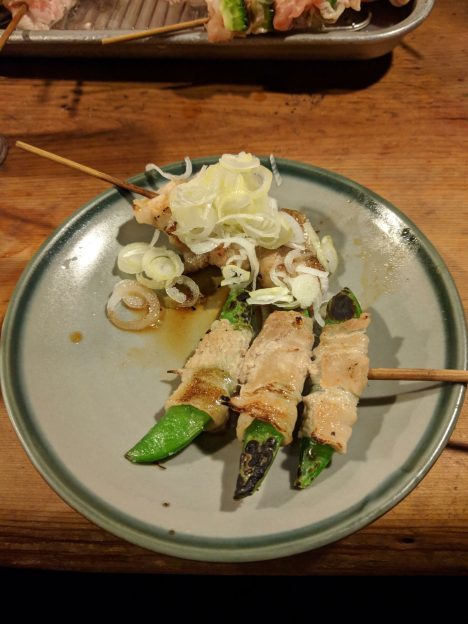 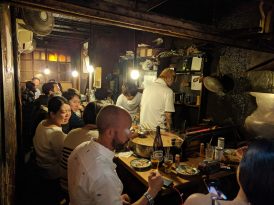 Max in line for a seat at Sasamoto

Skewers ready to be cooked at Sasamoto

Pizza at Savoy: Who goes to Tokyo and eats pizza? Who also wants in line for 1 hour to get 2 seats? We do! We saw Savoy Pizza in David Chang’s “Ugly Delicious” and decided to plan our morning around having lunch here. We read they don’t take reservations for lunch but they actually do, on weekends in case you are short on time. Like some of the other places we visited, Savoy is small and can fit maybe 10 people at most. The menu is limited to a few different types of pizza, wine, beer, and other beverages. We each ordered a margarita pizza which was prepared right before our eyes and served hot and fresh out of the oven within 15 seconds. It truly was the best pizza we had! Pizzas are about 1,500 Yen which is $18CAD and draft beer about $6 if we recall correctly. 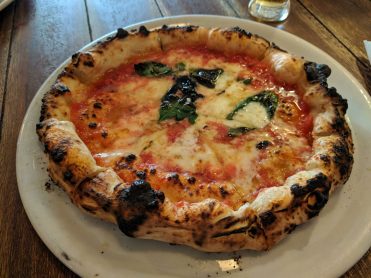 The pizza being made at Savoy

5) Visiting in the Fall – The weather in November:

There is a typhoon season in Japan in the fall and Tokyo is not usually affected but it is a risk if you are travelling there between May to October. We were very lucky to have nice weather overall; the days were sunny and warm, about +20 Celsius and the mornings and evenings and were cooler but not uncomfortable at about 10 Celsius. We made sure to pack the jackets we wear in Vancouver for rainy and windy weather and layer and felt comfortable walking around from morning and into the evening. We’d visit in November again based on the weather we experienced but would avoid colder months as we don’t like to pack winter attire when traveling.

6) Getting Around: Walking and the Subway:

Overall, we found it really easy to get around Tokyo by walking and taking the subway. The only difficulty we encountered was on arrival at HND – Tokyo Haneda Airport as the quickest way to get to Shinjuku involved transferring to another line and we were a little too tired and jetlagged to attempt that. On the train, we were able to access the WI-FI and use Google Maps to figure out our exits by number, which made things a lot easier. Google Maps for transit and walking worked really well here compared to other cities. As for walking, the streets were very safe, clean, and some of the signs were a little confusing but Google Maps came through to help us; we didn’t get lost once! 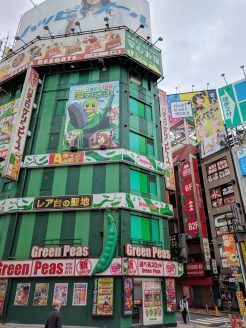 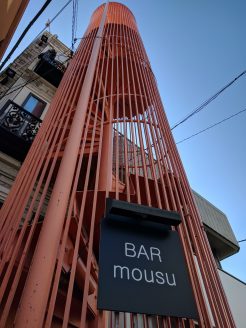 Since our flight was leaving from Narita Airport, which is 60 kilometers outside of Tokyo and it takes 1.5 hours via train to get there on the N’Ex Train from Shinjuku, we opted to take the first train out at 05:55, which would also give us some time to enjoy the JAL Lounge. We did purchase our tickets the day before using credit card from a machine at the station and also did a test run to walk to see where you take the train; good thing we did as it did take us close to 10 minutes to walk to the platform and they were also doing some renovations/construction which also made it slightly confusing. Overall, we really enjoyed the fast and mostly seamless train ride to the airport; there was enough space for luggage, cup holders for the coffee we purchased from the vending machine, and decent Wi-Fi. We did get stopped on the tracks though for 20 minutes due to security checks they needed to complete, which coincidentally also happened to us twice on the Tokyo subway as well.

Max with a coffee for the train ride to Narita Airport 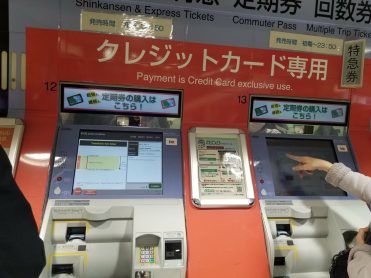 Ticket machine for the N’Ex Train at Shinjuku Station

Overall, it was really easy to visit Tokyo and get around; we also found it quite safe and clean. Initially, our first reaction was that it looked like other big cities until you walked into the side alleys where it was quite magical and felt like the Tokyo we’ve seen in films, on television and in books. There is so much to do and see in Tokyo and there truly is no right or wrong way to visit, just enjoy being there…and it’s okay to not wake up super early to go to the fish market!

Maybe it is our travel style and all the places we’ve been to before, but we just enjoyed walking around and walked about 20 kilometers one day, in awe of how things where, like the friendly police stations with cartoon characters in the front and all the places you come across that are so tiny but so unique and when you look them up online, you were surprised at not finding out much about them. Living in Vancouver where bike theft is very common, we were surprised at how many people bike in Tokyo and how they seem to just leave their bikes unlocked everywhere! Yes, you should plan to see and experience things in Tokyo, but if you don’t feel like it, just wander and enter the places that are open when you’re there, you won’t be disappointed! We enjoyed our visit to much that we look forward to coming back and adding a few more stops in Japan, like Osaka and Okinawa next time.

Have you visited Tokyo? If so, did you enjoy it?

3 thoughts on “Our Trip To Tokyo: 7 Things We Learned”