We feel it is super important to highlight how difficult it was to find the two First Class seats on the same flight. Many other travel blogs will promote this reward to get you to sign-up for a credit card that will earn them referral bonuses. Then, as you click through the same post again and use the tips they shared, you’re also generating revenue for these bloggers and in some cases, you might not be able to book what you wanted to in the first place which makes you feel like you were scammed…Sometimes you succeed and sometimes you don’t. It took us years to find 2 First Class on a Japan Airlines flight that were bookable; when we did find 2 tickets, we’d try to book them and it wouldn’t go through as it was “ghost availability”. Keep in mind that there are only 8 seats in the First Class cabin and we were the only passengers on a rewards ticket; everyone else on the flight had paid the hefty ticket price.

We further maximized this reward by adding a stop in Tokyo before flying south to Jakarta and then Bali where we would spend a week. For 70,000 and about $50, we ended up with about 20 hours of flying in premium cabins. These flights would have cost us about $18,000USD each had we paid for them. When you do find 2 seats and can book them for 70,000 points per ticket, you feel like you won the lottery!

We ended up flying from YVR – Vancouver International Airport to SFO – San Francisco International Airport via SEA – Seattle-Tacoma International Airport on Alaska Airlines as part of the rewards ticket. Because the Japan Airlines flight left SFO around 15:00 on a Friday, we decided to go the night before to not risk missing the flight. We would have had to take Friday off to get to SFO anyways and this added some extra peace of mind and minimized travel stress. We flew to SFO after work and stayed at a hotel. Unfortunately, hotels in SFO in the city and by the airport tend to be quite expensive so we used a Free Night Award to book the San Francisco Airport Marriott Waterfront and saved about $300USD.

The Pre-Departure Experience at SFO:

We decided to arrive to the airport around 13:00 to check out the lounges we had access to and to check-in. Since it was Halloween, JAL was handing out treats and we found the staff to be very friendly and helpful. We asked about switching seats to be on the same side of the cabin but since the cabin was full, this was not an option at the time. Overall, we were really impressed by the check-in experience and it definitely beats the Emirates First Class check-in experience out of Dubai.

JAL departs from Terminal A. As First Class passengers on Japan Airlines, we had access to the following lounges at SFO:

Overall, we were disappointed with the lounges and do not recommend coming to the airport early to enjoy the lounges.

The seat is pretty spacious and wide open; it has a width of 33 inches and 78.5 inches long. If the Emirates First Class seat was gaudy, the Japan Airlines First Class seat is somewhat drab and dated looking but overall well maintained, comfortable, and clean. You also store your baggage in the seat with you at the front; our Thule bags fit no problems and think most standard carry-on bags would fit no problem.

The great thing about the 2 rows of 4 seats in each row is that everyone has aisle access and as usual, we each chose a window seat.

The personal screen is 23 inches and was adequate but a little more difficult to watch something when you were fully reclined in bed more. We know, first world problems! We did find the selection of things to watch in-flight to be somewhat limited for this length of a flight and ended up reading more than we usually do.

Overall, the seat was comfortable and had enough chargers and options to make the flight comfortable.

If there was one thing that we were particularly excited about on this flight, it was the food. Yes, it is airplane food but we’d heard great things about the food and beverage options and they do live up to the hype! Upon boarding, we were offered some pre-departure champagne and the menus for the flight.

We had essentially made up our minds that we would be eating the Japanese food instead of ordering off the Western menu. By the time they arrived to Maxine’s seat, they had to confirm the Japanese meal was an option and thankfully, it was. In hindsight, we should have probably pre-ordered our meals as we would have been disappointed if our first choice wasn’t available; it does appear that you can reserve your meal up to 25 hours prior to departure. When we fly JAL business class in the future, we will for sure pre-order our Japanese meals. We will also do so about 2 weeks prior to departure in case any problems are encountered.

Amuse bouche and Champagne Salon 2007 (retails for about $750CAD a bottle if you can find it!)

When you order the Japanese meal, it’s served “Kaiseki style which is a traditional multi-course Japanese dinner. The Japanese Kaiseki menu includes eight courses and is plenty of food. First, is the “Kozara” course, a selection of small dishes. The second course is “Owan” a soup-type appetizer. Third, we had the “Mukozuke” which is seasonal sashimi. Fourth was the “Shiizakana”, the substantial dish. Fifth was the “Dainomono” which is said to be “food set out on a stand”. Sixth was “Hanmono”, a rice dish. Seventh was the “Tomewan” course that features vegetables or miso soup or both. And the eighth and final course was “Kanmi” which is dessert.

Overall, we loved this meal and got to try so many things we would never had the chance to try otherwise. Some of it was very different to our taste buds and we cannot say we liked some of the items but have no regrets. We also got to try “uni”, sea urchin for the first time and can see why people fall in love with it; it’s so rich and briny and reminds us a little of spot prawns. 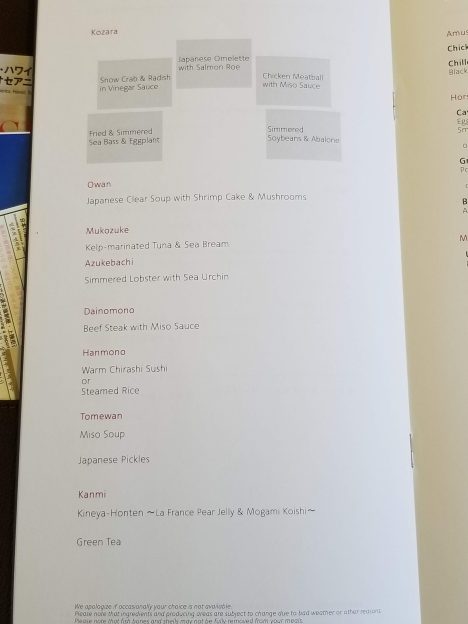 The first course, Kozara. See menu photo for information about each dish 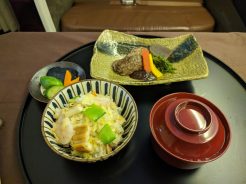 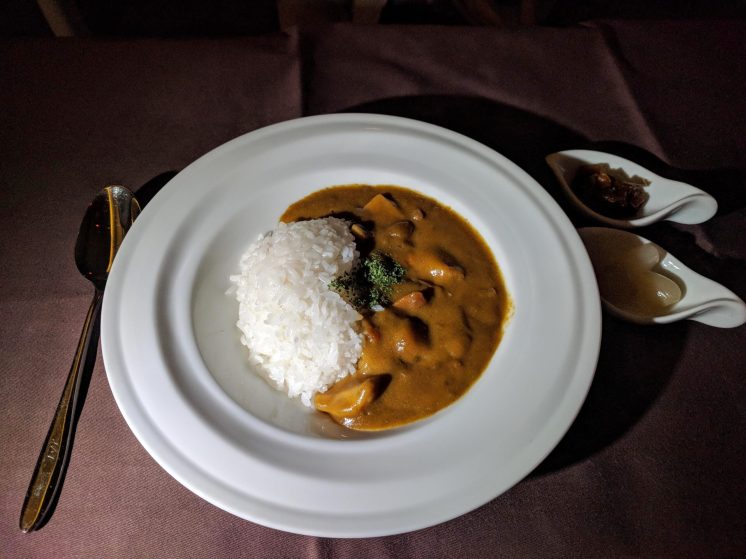 We also saved some room for the sushi they offer on the a-la-carte menu and it was delicious and fresh. We are excessively fussy about the sushi we eat; we don’t have anything negative to say about the sushi served on JAL and Jason liked it so much, he ordered two servings. The Japanese curry was also pretty good and we decided to try it since we’d never had this before.

As for the drink options, we really enjoyed the Champagne Salon 2007 and the Lanson Noble Cuvée Brut Vintage 2002. Jason had a glass of Chardonnay and Maxine tried some sake as recommended by the Flight Attendant. They also have a special “Royal Blue Tea” packaged in a wine bottle; it is served chilled and in a wine glass. The tea was very refreshing and not sweet which was perfect on this flight. We are also big coffee lovers and loved their selection of JAL Café Lines served in a French press; best coffee we’ve ever had on an airplane.

We have to say that this was one of the best, if not the best food and beverage experience we have ever experienced on a flight. We also enjoyed our meals on our JAL flight in business class from Tokyo-Narita to Jakarta Soekarno–Hatta International Airport which leads up to believe that JAL has a superior food and beverage program for its flights.

Unlike Emirates, they do not hand out the pajamas at boarding; you can ask for them anytime. We both wore the pajamas after the meal service to rest. If there is one thing that was common in most reviews we read, it’s how warm the cabin temperature in. You definitely did not need the blanket to sleep at times, especially due to how warm the pajamas are.

When we boarded and found our seats, there was an amenity kit and a kit of Shiseido beauty products that were 100 mls or less thankfully so that we could take them with us on our other flights. We still prefer the Emirates First Class kits but enjoyed the Japan Airlines kit, especially since it had those moisture masks we have seen and hard people rave about. Maxine wore the moisture mask and found it helped to not have a dry throat and nose and it also smelled nice and not too overpowering.

At the end of the flight prior to landing, the Flight Attendants came to thank us for flying with them and presented us with a red gift bag that included some Japanese snacks and an A350 miniature model airplane with a hand-written message.

Overall, it was a great flight and we would definitely love to fly Japan Airlines First Class again one day but if not, we will be happy with business class (as long as it’s a full-lie flat seat). We enjoyed our time in Tokyo so much and hope to go back and flying in JAL First Class was the perfect way to start our trip to Japan!

The product may not be as exciting or glamorous as Emirates, Etihad or even the new Qatar Q Suites but the food and beverage certainly does if you like Japanese food and plan to fly to and/or from Japan. We do not think this reward will last at the rate it is now due to Alaska Airlines joining oneworld and the likelihood of a devaluation but if you can find it, book it while you can!

Have you ever flown Japan Airlines First Class? Have you had trouble finding availability to book this using Alaska Airlines Mileage Plan miles?